Yes – that’s right, I just came up with the fourth law!

The fourth law of thermodynamics is called the Conservation of Economy and it states:

For every bit of unexpected money you receive, there is an equal and opposite unexpected bill that needs to be paid.

Phones
Pho-oans
Foe-owns
I called your phone
But I didn’t know
So you do not have to call back.

Carrots and potatoes are very nice,
But refried beans just take the cake
Because you can enjoy them thrice!

I’m not paranoid:  There are two people in the world I trust; you, and me.  However, I’m not so sure about you… 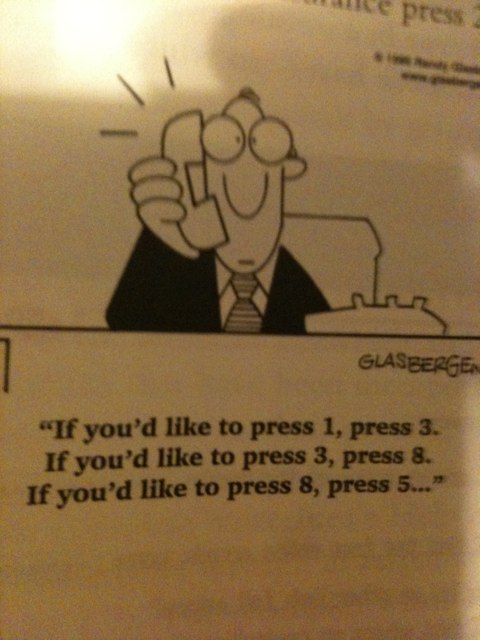 I’ve been too busy to write about anything – but I thought this was funny!

This morning, I found this in the mail; I guess I must have missed it back in October.

From the Offices of:

As you know, the Christmas season is soon upon us. Due to the economic down turn of the global economy, I regret to inform you that this year, I must change our Christmas traditions – only slightly.

Last week the GPS went bad in the sleigh (what, you don’t think Santa knows how to use technology?), and that my friends was awfully expensive; I swear the dealerships are intentionally making things harder to fix on your own sleigh – it’s a racket!

The day after the GPS was fixed I found that moths had eaten through my Santa suit – if dealerships weren’t bad enough, I had to go to the local department store to get a new suit – bleeding hearts of the world unite!

Later on that day the toilet in office #10 backed up. Once the plumber got done giving our pipes the shaft (and our wallets too), he announced that Christmas tree roots had infiltrated them; and we would need to hire a backhoe to come in and dig up and replace the pipes.

Well, as you know, in the North Pole it’s pretty cold – so we had to hire some specialists (i.e. the U.S. Government) to come in and handle it.

While the U.S. government doesn’t actually believe in magic and Christmas and for sure Peace on Earth, what they do believe in is taking money from anyone and everyone they can get their paws on – so needless to say, while over charging us for the work they were doing they also snuck in some tax assessors and slapped us with over a million dollars in back taxes (who knew that we had to pay taxes on all the toys that WE make and give away!).

If that wasn’t bad enough, because of the shortage of the flu shots, Mrs. Claus came down with a variant called the reindeer flu. As you know, we are self-employed, but we do not qualify for Medicare, and between the government and the insurance companies, and now the medical bills we have had to sell a few of the reindeer to make ends meet.

So, in the spirit of Christmas giving, this year, I must ask that you give a small donation in appreciation of the time, money and effort we all put in here at the North Pole. This money will be used to pay off medical bills, legal bills, and repairs, as well as paying our 2010 insurance premiums which have just gone up as the insurance company found out that I am a bit overweight!

Due to the restrictions placed on the North Pole by the United States Government, who has now decided that we are all Americans and under their sovereign rule; I ask that you give donations of monetary value less than 200 dollars at any given time, and more importantly, in cash only.

I appreciate your understanding,

An interesting exercise in doublethink.

So we drove into Portland last night, from Miami, and Haiti the day before (around 95 degrees and 90% humidity).  We were in shorts and t-Shirts, and we jumped out of the car to get a bite to eat.

As we were sitting in the restaurant Donovan said to me:  “Papa, when we came back to Maine, there was a sign that said ‘Maine, the way life should be’; but let me tell you, Life shouldn’t be like this, unless you live in Antarctica!”.

Amanda and I couldn’t stop laughing….!

We were discussing in my discrete math how you can represent genealogical information by trees; but I had to point out that as trees can’t be cyclical, and genealogies can be – that technically we can’t use trees to represent genealogies.  For example, what if you were your own grandpa – that would create a cycle and would break the whole tree thing…  What?  You say it’s not possible to be your own grandfather… surely it is.. just look…

Now many, many years ago, when I was twenty-three,
I was married to a widow who was pretty as could be.
This widow had a grown-up daughter who had hair of red.
My father fell in love with her, and soon they, too, were wed.

This made my dad my son-in-law and changed my very life,
My daughter was my mother, cause she was my father’s wife.
To complicate the matter, even though it brought me joy,
I soon became the father of a bouncing baby boy.

My little baby then became a brother-in-law to Dad,
And so became my uncle, though it made me very sad.
For if he was my uncle, then that also made him brother
Of the widow’s grown-up daughter, who, of course, was my stepmother.

Father’s wife then had a son who kept him on the run,
And he became my grandchild, for he was my daughter’s son.
My wife is now my mother’s mother, and it makes me blue,
Because, although she is my wife, she’s my grandmother, too.

Now if my wife is my grandmother, then I’m her grandchild,
And everytime I think of it, it nearly drives me wild,
For now I have become the strangest case you ever saw
As husband of my grandmother, I am my own grandpa!